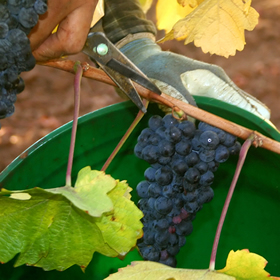 According to the crop forecast drawn up on the first of October, France would produce 40.609000 hectolitres of wine in 2012 (-20% in comparison with 2011, -13% in comparison with the five-year average). Each time there is a new issue of the Newsletter from the Office of Statistics and Studies, the French crop forecast decreases (42.9 million hectolitres in September, 44.1 million in August). Le latest Newsletter explains that “in view of the trend decline of the vine surfaces in production, the year 2012 is close to 2008 with regard to the overall return”.

The forecast is being revised downwards mainly because of the dry weather in September. The Office of Statistics and studies are also announcing that “in view of the heterogeneity of the weight of the berries in the wine areas of most of the regions, the exact yields would not be known before the end of the harvest, expected at the end of October”. If the current forecast is fulfilled, France would only just remain at the first place of the wine producer countries in the world”.